The festival will actively contribute to reducing electricity expenditure, through limited LED-usage, and by getting visitors to gather outside and leave TV’s and computers turned off at home.

From the outset Copenhagen Light Festival has concerned itself with limiting energy expenditure. In 2023, the festival will gather the light installations geographically, so that the festival remains as beautiful as always but with less energy used.

Looking at the numbers, we can conclude that Copenhagen Light Festival actively contributes to lowering electricity expenditure.
During the COVID-19 lockdowns it was important to disperse – now it is important to gather around the common use of electricity.

The argument that lighting should contribute significantly to our society’s total electricity expenditure is the result of pre-LED logic – electricity bills since the introduction of LED-lighting have fallen by 60-90%.

Taking all of this into account, we are actively attempting to gather people around the festival in february of 2023. At the same time, we are constantly keeping an eye on the supply situation, and are ready to react to changes at any given moment. Copenhagen Light Festival is a vital part of the city’s economic and cultural life, and it creates a sense of community and proximity. 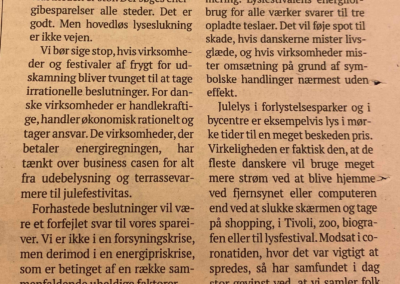 “Actually, it is the case that, unlike in corona times, when it was important to spread out, society today has a great benefit from us gathering people around the current,” says Lars Ramme Nielsen. Market manager. Danish Business article. 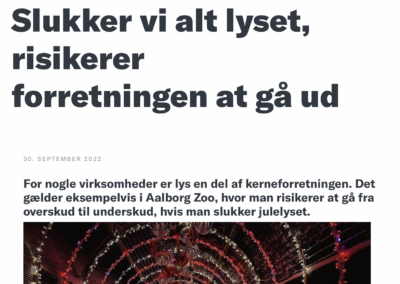 The low consumption surprises many, but it is important to focus on. Because by canceling events for fear of the electricity bill and without looking at the actual costs, we risk taking the livelihood from the small and medium-sized companies that are suppliers for various events and events. 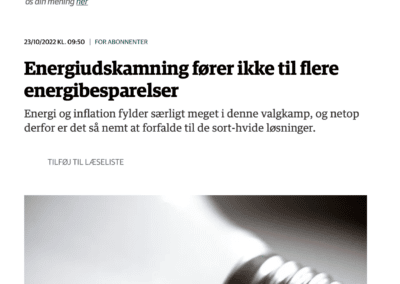 Thank you TV 2 Lorry:
Copenhagen Light Festival saves a lot of energy when thousands switch off at home and go to the LED light festival – which for 3 weeks uses as much as 1 Superliga match.

Copenhagen Light Festival have shared info with our collegue and partner Nobel Week Lights. They use 10x less energy over 9 days than if their audience all watched TV for an hour. Swedish TV also talks about the importance of bringing people together, providing a welcoming cultural experience in public space.
https://www.svt.se/kultur/guide-lista-ljusfestivaler-i-sverige-2022-nobel-week-lights-allt-ljus-pa-uppsala-boras-bright-art