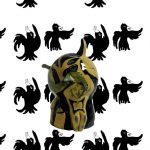 FOKUS video art festival is an annually recurring event for international video art, arranged by Nikolaj Kunsthal since 2011. The 10 nominated videos can be experienced at the Nikolaj Kunsthal cinema as well as around The Copenhagen Cultural District, e.g. at The Royal Danish Arsenal Museum, Thorvaldsens Museum, The Theatre Museum and Danish Architecture Centre – as well as in the privacy of your own home. Again this year, FOKUS moves beyond the usual framework of the exhibition format, out into the cityscape and into your phone or tablet. On March 1, you are also invited to a screening at the Cinematheque where all 10 nominated titles will be presented and the 2018 winners will be announced.